Things you may want to know about before making a purchase, because many other people concern about them.

First, all of the Dyson cordless vacuum cleaners are bagless and battery powered. All of them do NOT operate while charging, which means you cannot use it to vacuum with cord attached.

Second, all of the Dyson cordless units use Trigger type On/Off design, Dyson claimed that such design can save battery power and then extend running time. However, with this design, you have to keep pressing the trigger when in use. Some people like such design while others does not like it because they feel it cause finger fatigue. So you’d better try it before buying if you never had one. Test it at local stores, or borrow one from friends or neighbors if possible.

Third, though the battery pack on the unit is replaceable, you have to use a screw driver to unscrew 2 (on V6) or 3 (on V7,V8,V10) phillips screws to remove the battery pack. So this is not a design that allows you to have a second battery pack to conveniently swap to use in your daily cleaning jobs. For those who prefer a cordless vacuum with 2 swappable batteries, please think over.

Now, if you decide to buy one but get confused by the various similar models, here are some info that may make it clear. We list major difference between them.

About V6. Though it is the lowest price one of the four. But its running time on low setting is the shortest one, bin is the smallest, tools are harder to switch.

V7 use the direct drive cleaner head, has better brush bar power than the V6 and longer running time on low setting, but suction power on low setting is down from 28 air watts to 21 air watts compared to V6.

V8 has greater suction power than the V7, 28 air watts versus 21 air watts on previous model at low setting, 115 air watts versus 100 air watts at high setting. And it provides 10 minutes longer running time on low setting. But the change on the battery also increase its charging time, the other models only require 3.5 hours to recharge while the V8 needs 5 hours to fully charge.

V10 provides the most powerful suction on the max mode, much greater than the previous models. Its design is different from the previous models, such as the hygienic point and shoot empty mechanism, adding one more power mode, the one piece filter to replace the pre-motor filter and post motor filter. It can run up to 60 minutes with a non motorized tool on low setting(16 air watts is not strong enough for most vacuuming jobs), but the running time on medium (33 air watts suction power) and high setting(151 air watts) are not better than the V8 low setting(28 air watts) and high setting(115 air watts). One more thing you should know about the Cyclone V10 — with the redesign on the unit, you have to remove the tools/wand before emptying the bin. The previous models do not require you to remove tools/wand to empty. It seems the new design is not as convenient as the older models, but for the old models, there is also chances to open the dust bin accidentally, then spill dust.

Buy the V6 if you just want to try a Dyson cordless vacuum.

V7 or V8. The V7 is a little cheaper than the V8. Buy the V7 if you want 1.5 hours shorter charging time. Choose the V8 if you want better suction power and longer running time.

Buy the V10 if you have enough budget, and need one with larger bin, and the most powerful suction for occasional intensive cleaning.

The Cyclone V10 has some redesign compared to previous models, such as adding one more power mode, hygienic “point and shoot” empty mechanism, one piece filter to replace dual filters. It provides much more suction power at max mode than the V6,V7 and V8 models.

The V10 Absolute and Animal is the same except for color and accessories. The Motorhead is different from the above versions, it has a small dust cup and it does NOT come with the new Torque drive cleaner head, instead, it includes the Direct drive cleaner head like the previous generation.

Not all of the V7 cordless models feature HEPA filtration; the color of the cyclone part and the wand is the obvious thing that makes them different from each other; the model that comes with more tools are more expensive.

Both of these 2 Dyson upright vacuum cleaners are small and lightweight, they are lighter to carry up/down stairs and around your home, and save more storage space than a Dyson’s full size upright vacuum such as the Dyson Ball and Cinetic Big Ball. But with less suction power, smaller dust cup. 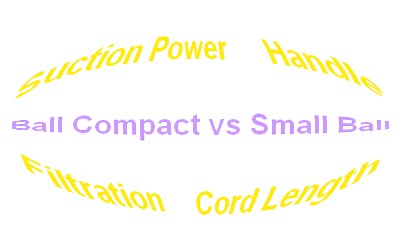 They are similar but not identical to each other.

Suction Power
The Ball Compact has a suction power of 128AW versus 150AW on the Small Ball.

Weight
Both are light, the Ball Compact weighs 11.6 lbs whereas the Small Ball weighs 12.15 lbs.

Cord Length
The Ball Compact has a cord length of 25ft. versus 31ft. on the Small Ball.

Handle
The handle on the Small Ball is detachable whereas the Ball Compact handle is not removable.

If you are an allergy sufferer, the HEPA filter might be the biggest thing you want to take into consideration, the Ball Compact should be better since it has Whole-machine HEPA filtration.

Dust Cup Capacity
The Ball has a much larger bin, it holds up to 0.55 gallons while the Small Ball holds only 0.21 gallons.

Suction Control
The Small Ball has a suction control slider on top of the cleaner head, it seems that the Ball does not have this slider.

Filtration
The Ball features HEPA filtration whereas the Small Ball does not.

Cord Length
The Ball has a 30ft. cord versus 31ft. on the Small Ball.

Max Reach
The Ball has a max reach of 51ft versus 42ft on the Small Ball.

Accessories
The included accessories vary depending on which versions you buy.

Similarities
They have self-adjusting cleaner head that automatically adjust for hard floors and carpeted surfaces;
ball technology for easy steering;
hygienic bin emptying that only requires a button push;
5 year limited warranty;
both cleaner head can be detached for removing blockage;
washable filters.

Dyson just added a new vacuum – the Dyson V8 to its cordless vacuum cleaner familiy, this new vacuum looks similar to its predecessor – the battery driven V6. However, they are not identical to each other, there is design changes and improvements on the V8.
Below is some main differences between the Dyson cordless V6 and V8.

Battery Life Indicator
The V6 only has a blue light to warn about low battery whereas the V8 now has a batter life indicator that tells the remaining battery power.

Dust Empty System
This is another big change.
With the new bin emptying design – hygienic dirt ejector on the V8, you can just pull and lift upwards the red lever to empty the bin without touching any dirt.
There is rubber collar that scrape off the mess that built up and stuck inside.
The V6 uses bottom empty dust cup, you press a red button to open the bin base to release the dirt. It does not have the mechanism that allows you to lift up the cyclone part to scrape off the collected mess. Sometimes you may have to use your finger to remove dirt and debris that stuck inside the bin.

Dust Cup Capacity
Both have a small size bin, however, the V8 has a bit larger bin, its bin capacity is 0.14 gallons whereas the V6 holds up to 0.11 gallons.

You can download manuals to learn more if you like.
Dyson V8 Absolute Manual
http://www.dyson.com/medialibrary/Files/Dyson/Support/downloads/US/Floorcare/manuals/V8_Absolute_SV10_OPMAN_US.ashx
Dyson V6 Absolute Manual
https://www.dyson.com/medialibrary/Files/Dyson/Support/downloads/US/Floorcare/manuals/V6_SV06_Absolute_Manual.pdf

If you have any experience with these Dyson battery driven vacuum cleaners, please share below.

We will discuss the difference between Dyson DC56 and V6 within this post. 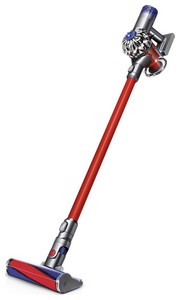 Filtration
DC56 does not use HEPA filter.
V6 feature whole machine HEPA filtration which captures particles as small as 0.3 microns that makes the air that leaves the machine is cleaner than the air you breathe.

Do you own these Dyson Hand/Stick vacuum cleaners? If yes, please share more info below, thanks.

By continuing to browse the site you are agreeing to our use of cookies.